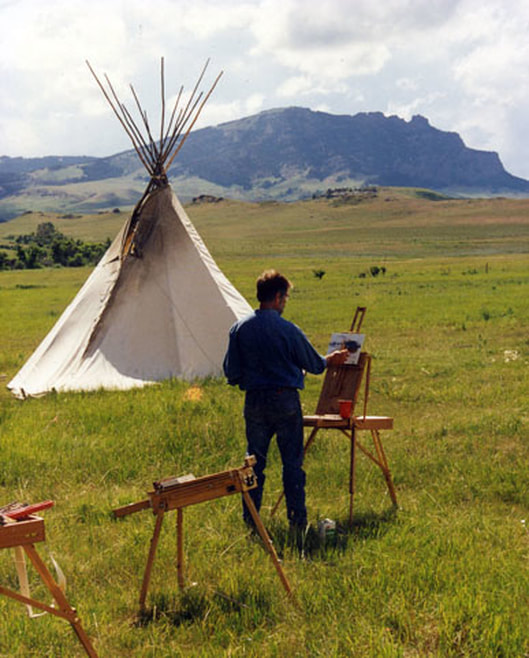 Gilleon’s long and winding road through the art world began in the tiny town of Starke, Florida, where he grew up sketching in the white beach sand of his grandparents’ front yard. Both his grandparents’ heritage and the aesthetics of their simple living would have an important influence on the artist’s future work.

His grandfather was a renowned cabinet maker and immigrant from Scotland who passed the rebellious spirit and resilience of his ancestors to his grandson. His grandmother, a full-blooded Cherokee, was a descendent of tribal members who refused to take part in the infamous Trail of Tears. Her unwavering resistance to Anglicization fostered a deep appreciation in the young artist of the Native American way of life and their history of conquest and survival.

Gilleon is best known for his paintings of tipis illuminated from within by an evening fire, or from without by the haunting gleam of the setting sun. He traces his talent for creating these arresting light displays to his grandparent’s home: “My memory of the important events in my early life are set somehow in dramatic theater lighting,” he recalls. “We lived in a little place where there was no electricity and the inside of our wooden home was lit by kerosene lanterns. I always felt drawn into the light and everything around the glow disappeared into a blur.”

After graduating from high school in the early 1960’s, Gilleon accepted a baseball scholarship to the University of Florida where he studied architecture. He was fascinated by architecture and its attention to form, composition, and structure, but his childhood dream of becoming a professional pitcher faded. Gilleon left the university to join the navy and afterward began work as an illustrator for NASA’s Apollo space program.

Soon Gilleon left the world of technical illustration for more interesting work as an Imagineer in Disneyland. He met and married his wife Laurie Stevens who was also working there at the time, painting murals and set backdrops for films. In the early 1980’s, they visited Montana together and were so captivated by its beauty that they bought land hidden beneath several feet of snow in the dead of winter. Their property proved to be spectacular, sitting above the clear green waters of the Dearborn River and looking out over the Bob Marshall Wilderness. After nine years of life in the mountains, the two artists purchased a 2,000-acre ranch near Great Falls, Montana and moved to the prairie.

The ranch has been an endless source of inspiration for Gilleon. Not far from the legendary Old North Trail where native tribes traveled millennia ago from the Arctic to the desert Southwest, their land itself is an ancient crossroads. Native Americans hunted buffalo in the family’s prairie coulees and Gilleon has found clusters of tipi rings which still contain the fire pits of Western wanderers. He has slept and sketched within the circles, imagining how the camps may have looked centuries ago.

Although Gilleon’s Cherokee ancestors actively resisted the move west, he feels that living in Montana has brought his heritage full circle: “I moved to Montana thirty years ago and decided I could never live anywhere else. Being in a place like this makes you appreciate the Native American way of life. They didn’t stand outside of the natural world looking in. They were part of it. My work is largely an attempt to bridge the gap between their way of seeing things and ours.”

The C.M. Russell Museum founded the Russell Skull Society of Artists in 2013 to recognize living American Western artists whose work celebrates the themes and tradition of Charles M. Russell (1864–1926) and his contemporaries in their portrayal of the Old West.
Currently the group comprises 22 distinguished members recognized for their artistic achievement, ongoing commitment to the mission of the Russell Museum, and history of participation in The Russell: An Exhibition and Sale to Benefit the C.M. Russell Museum, the museum’s major fundraising event.  Tom has been a member of the Skull Society since its creation.

Tom is a member of the Board of Trustees of the Out West Art Foundation since its founding in 2014, and he creates an annual poster
to raise funds for the Young Masters Art Scholarship program.
Website:  http://tomgilleon.com/